I bought a broken RNC online for $40 shipped. The seller literally tried every possible wall-wart with the unit except for what’s written on the back of it: 9VAC @ 500mA.

He mentioned smoke coming out at some point, so the first thing I did when I got it was to open it and see what burned, but nothing looked burnt. So I ran it on a 9VAC wall-wart I have, but before I plugged it into my interface, I decided to look at the outputs to see if spitting out a high voltage. Both were putting out 4VDC. I took another glance at the unit and noticed two bulging 470uF capacitors.

I tried to trace the power supply circuit, but it didn’t look like the usual rectifier and regulator circuit. I called Mark at FMR Audio and he explained that they use a charge pump to generate +/-15VDC. Now things were making more sense, especially when the two bulging capacitors are the rectifying caps. I replaced them with other 470uF 25V capacitors and no more DC at the outputs. The compressor seems to work fine, but the capacitors get kind of warm and the regulators get even warmer to the point where I can’t leave my finger on them for too long. I also noticed that the DC voltage on the two caps I replaced is a bit over 25V. Weird since the factory caps were also rated at 25V. Another weird thing I noticed is that my wall-wart puts out 10-point-something VAC even when it’s loaded.

I called Mark at FMR again and he explained that since my wall-wart is rated at 1.5A, it’s probably too stiff a voltage source for the RNC. We then calculated that the extra voltage is what’s causing the higher DC voltage I was seeing on the capacitors.  He also suggested swapping the 25V capacitors for ones rated at 35V so that they’ll last longer. He did say that the regulators getting warm is normal and expected considering the voltage drop and current through them. He also tipped me to the wall-warts they sell with their units (Jameco part no. 100061). Lastly, he said that the two distortion trimpots should be left alone. They dial in the distortion with an Audio Precision to .005%. He then mentioned that the units keep their calibration for the longest time.

As you can tell, Mark was extremely helpful. He is happy to answer question and help probe a broken unit, and never even said that I should mail it to them to repair it. If you’re looking for a new compressor, consider the RNC because it’s awesome and cheap, and their support is excellent.

Nothing fancy. Worked this week on an Aria Precise bass (a P-Bass knockoff). It’s a pretty neat bass, but needed a new volume pot and I felt like the neck was weird – I ended up maxing out the truss rod for acceptable relief.

I also had to replace the pickguard on that bass (owner wanted a different flavor, is all), and that required a lot of filing, scraping, and sanding to get it to fit right by the neck and over the pickups. A razor blade with a burr works really well for scraping here. Files are not great. The best tool for getting the pickup openings right is to take one pickup cover, put sticky sandpaper around it and use it to shape the openings. This maintained the right radii of the corners.

I also set up a friend’s Guild M-120. All Mahogany, made in China, and it sounded and played great. Fretwork was pretty much excellent, and the neck is straight with a very responsive truss rod. For that price, you really can’t go wrong with those guitars.

Also re-wired an EV RE 664 with an XLR connector and at the same time eliminating the Hi-Z output. I’ll make a post about that later.

I also finished (in December) my second rack. It turned out pretty well, about as good as the first one did. I had a few mishaps, the biggest of them was that even though after I dry-practiced for more than 5 times, when I came to glue it together, things weren’t square so I had to take it apart while the glue was starting to set. It was incredibly stressful and I had to clean the glue out of the joints with a lot of water, which warped the the wood a bit, but like I said, it turned out fine. I’ll probably write a whole post about the new rack, but for now here are some pictures:

All four sides are glued, prior to aprons, dowels, or rails.

Gluing the rails. Yes, that’s a lot of clamps.

Also worked on a few other guitars in the last few months, as well as my own Stratocaster. I “inlayed” a piece of mahogany in the neck pocket: 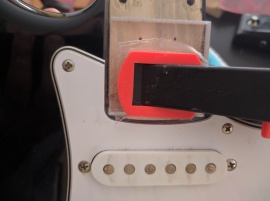 I’m also building some drawers for my works area, but more on that when they’re done next week hopefully. Maybe I’ll write a whole post about it.

That’s pretty much it other than little jobs.